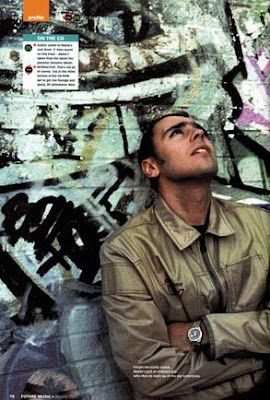 Yeah, you'd get it Alesha, but this one goes out to Blame, not you.

If you haven't heard of Blame you should probably get out more (or just keep reading this blog religiously). Blame's been around the Drum & Bass scene for years, but recently he's been receiving a lot of well deserved recognition. 2008 saw the release of Stay Forever, a massive tune that soon began receiving some serious air play on Radio 1 and 1Xtra, as well as blowing up dancefloors across the country.
This year Blame's showing no signs of slowing down, having already released one of the biggest liquid D&B anthems of the year, Because Of You.

Perhaps more exciting than his original productions, however, are his remixes. His remix of Show Me Love has been at number 1 in the Top 100 Drum & Bass tracks on www.trackitdown.net for a long time and has received a lot of support from fellow DJs, and quite rightly so - its huge. His latest remix of Alesha Dixon's Lets Get Excited is basically more of the same; a big commercial track reworked to appeal to a different dancefloor.

However, one notable thing about Blame is his accessible sound; don't be surprised to find his tunes getting played out mainstream nightclubs as well as D&B raves. Alongside Brookes Brothers, Blame is definitely a Drum & Bass producer to watch in 2009.